The South Plaza serves as the southern Focal Point within the down- town core. Inspired by the surrounding local businesses and strong Hispanic community, the South Plaza takes on a traditional symmetric design. Building from the existing Plaza Del Sol shopping center, the en-framing building extends to the west and is accessed on all sides. This building will take on a “Commercial Baroque” style with stucco and glazed tile facades and red clay roofs like what is seen at Highland Park Village, north of Dallas.

Accompanying a traditional market would be an arcade incorporated into the plaza side of the building to offer shade and shelter from rain. On the southeast corner is a four story tall clock and/or bell tower announcing not only the plaza but the neighborhood surrounding it as well. Centrally lo- cated is a 55’ diameter open air gazebo that can be used for all sorts of events, parties, and markets. It is large enough to host a band and dancing. Pathways fanning out from this central feature are flanked by large planting beds that are perfect hosts for annual blue bonnet displays.

City Hall would compliment the plaza space nicely if it expanded south to Crockett St. On the east side of the plaza are two 10’ x 65’ splash pads with bench seating among the shade trees. Dallas Street to the clock tower and Crockett St. from Dallas St. to the alleyways and the plaza itself are raised to one level to make the space very pedestrian friendly and oriented. Bollards along the plaza side delineate vehicular space from the main pedestrian spaces. 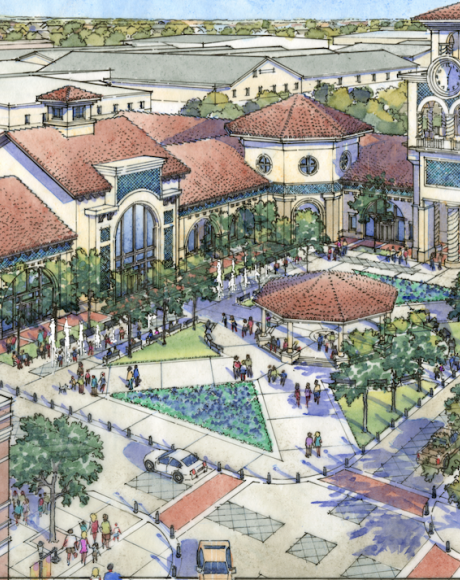 Join The Future of Ennis.